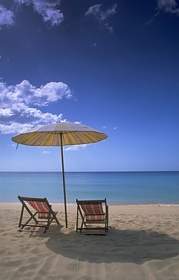 Phuket (pronounced "Poo-get") Island is commonly referred to as the "Pearl of the South" and is the largest island in Thailand. Phuket Island runs 48 kilometers (34 miles) north to south and 21 kilometers (16 miles) east to west. Phuket is broken by a chain of mountains and valleys mainly from a north-south range running down the west coast. This accounts for about 70% of the land area. The tallest peak, Mai Tao Sip Song (12 Cane Peak) is 529 meters high. The other 30% of the island is flat and comprises mainly the central and eastern portions of the island.

Lying in the Andaman Sea off southern Thailand`s west coast, the island`s terrain is incredibly varied, with rocky headlands, long broad sandy beaches, limestone cliffs, forested hills, small estuaries, lagoons, and tropical vegetation of all kinds. Its large size has allowed micro-climates to develop in different areas of the island.

The island offers many different looks and feels for you to discover and enjoy. From Kata Beach with its spectacular tropical scenery, to the stately Casuarinas trees that are found on Nai Yang Beach just a few kilometers north. From the triple canopy rainforest of Khao Phra Thaeo National Park to the mud flats and mangrove swamps of Koh Siray. Limestone outcroppings line the east coast and solid granite boulders on the west. Phuket is truly a tropical wonderland and offers something for just about everyone.