Phuket Thailand travel guide - Getting around

The main roads on Phuket are generally in good condition and well marked with signs in both Thai and English. The mountainous terrain limits the number of roads that cross the island east to west so at times you will be taking a roundabout trip to your destination.

Thais are taught from childhood to maintain jai yen (cool heart), public displays of anger are rather rare and generally do not achieve the desired effect. As you attempt to travel around the island, or anywhere in Thailand, you will undoubtedly be given ample opportunities to develop this skill for yourself.

Thailand may be known as the 'land of smiles', but trying to cross the street anywhere in the kingdom even at a marked crosswalk is literally taking your life in your hands. Thais may pride themselves on their polite behavior but while observing them attempt to operate motor vehicles, polite is unlikely to be the first adjective that comes to mind. On display daily are an array of driving skills, or lack thereof, that would logically conclude with the driver being admitted to an asylum, or being cremated. In a quirk of nature it seems those who operate a motor vehicle like an idiot, or while drunk, or ‘hopped up’ on amphetamines usually kill or injure the innocent.

None of the above types of drivers are an endangered species on the island and to observe them in there natural habitat just walk outside on any street, you will not have to wait long. Fleeing the scene of an accident when at fault has become almost expected behavior throughout the kingdom.

While driving (or walking) the unwritten rule of the road is the bigger and or more expensive vehicle always has the right-of-way, and can drive on whatever side of the road that pleases them. My intention is not to scare you, but to remind you that traveling in a foreign country can be as perilous as it is pleasurable.

The warm balmy climate, the natural beauty of the island, and the winding mountain roads, all make Phuket a natural for cruising around on a motorbike. Motorbikes are the most common mode of transportation on the island.

Motorbikes are also the most common cause of serious injury and death on the island. No statistics are available as to the number of motorbike injuries sustained by visitors to Phuket but the number is substantial.

Insurance is not available on any rental motorbike. If it is damaged or stolen you will have to pay it’s for replacement plus any property damage or injuries caused to others.

Phuket has and at times enforces a motorbike helmet law. The helmets available here are more for decoration then a serious safety device, but the fine for a driver without one is 500 baht.

The daily rental rate for the small motorbikes like the ‘Honda Dream’ is 200-300 baht. The larger bikes rent for 500-800 baht, but in both cases the locals will be quite happy to charge the uninformed more.

Motorcycle drivers dressed in a green or maroon vest are providing a short trip taxi service. They are at times the fastest and cheapest way to get around. Simply wave one to a stop and ask for the fare to your destination. 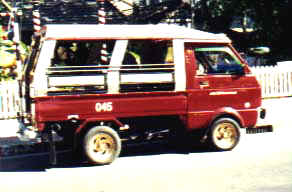 Tuk-Tuks are small red vans with open sides. The drivers have for the most part been allowed to nurture their nefarious reputations and continue to represent the largest source of complaints by visitors to the Tourist Police.
The drivers fiercely fight any attempt to make them use meters and all rates must be negotiated. A rainy day, a late night trip, a navy ship in port, or just about any other reason is an excuse to charge more.
The rate paid is by the distance traveled not by the number of passengers. If the driver wants to charge by the person wave him on and catch another.
Many Tuk-Tuk drivers like to double as travel agents - Don’t Do It!. They will normally only take you to a place that will pay them an commission. Contrary to conventional wisdom, Tuk-Tuks are not a good source of information unless you enjoy being taken for a ride.

There is a daytime bus service (songthaew) to most parts of the island. Songthaew (means two rows) which refers to the two wooden benches that run down each side of this colorful wooden-body public transport vehicle.
All buses run on a loop route between a beach location like Patong and back to the songthaew stop on Ranong Road in Phuket Town. The bus fare between Patong and Phuket Town is 25 Baht, and the travel time is about thirty minutes.
It is unfortunate they do not circle the island on the new ring road or travel from beach to beach, for example to travel from Patong seven kilometers south to Karon beach you must first take the songthaew 15 kilometers to Phuket Town transfer to another songthaew and ride approximately 20 kilometers to Karon Beach. Any effort to improve the bus service and or extend the hours of operation is violently opposed by the Tuk-Tuk drivers who insist the competition will cut into there business.
Compared with tuk-tuks a songthaew is generally a safer ride, with fewer hassles, from a driver who is more likely to be sane and sober, and at a fraction of the price of a tuk-tuk.

Cars and jeeps can be rented at numerous locations around the island. A valid international driver’s license or a state license from one’s own country is all that is required.

Rates begin at 800 baht per day with unlimited mileage. You pay for the gasoline. Most major hotels are serviced by Hertz and Avis car rental companies. The most expensive place to rent a car is at the airport. If a vehicle is rented at one location and dropped off at another, there is a usually a 500 baht charge. Private owners of jeeps parked along beach roads in Patong and Karon Beach charge 800-1000 baht per day not including gasoline. The price includes first class insurance which covers both parties.

When renting a vehicle, be aware that you are liable for all damages to the vehicle, read the fine print. Make sure you car is insured for accidents caused by another party that then flees the scene of the accident.

The ubiquitous longtail boat is found wherever there is water in southern Thailand. The current version with the motor mounted on the back is just the latest modification on this ancient but quite seaworthy craft. Often called the workhorse of the Andaman Sea, longtails are used in to provide a number of marine services.

While not as flashy or fast as modern speedboats, a voyage in a longtail boat is an interesting experience and a great way to take short sightseeing trips. The one serious disadvantage of the longtail is the almost complete lack of safety equipment such as lifejackets. Longtails are not advisable while traveling with small children or non-swimmers. Rental prices average 800 baht per hour for a short trips and up to 3000 baht for an entire day.