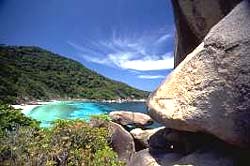 The Similan Islands lie approximately 100 km Northwest of Phuket, Thailand. Declared a National Park in 1982, the Similans are comprised of 9 islands which run roughly North to South with numerous smaller rock outcroppings.

With snow-white beaches, lush tropical jungle and spectacular dive sites in stunning turquoise waters, it's not surprising that the Similans are ranked as one of the top 10 dive sites in the world!

Nearly all of the 9 islands are surrounded by huge underwater rock formations, eroded by the action of a relentless sea. These stone giants are home to an amazing variety of marine life, with depths often reaching 40 meters or more. Narrow swim-thru's, caverns and underwater canyons form a truly unique diving landscape. With names like 'Elephant Head', 'Boulder City', 'Sharkfin Reef' and 'East of Eden', you'll soon appreciate why the Similans deserve the reputation they've obtained.
Populated by over 500 species of hard and soft corals and an amazing variety of marine life including Leopard Sharks, Silvertip Reef Sharks, Guitar Rays, Manta Rays and the awe inspiring Whale Shark, the Similans Islands are a true diver's paradise just waiting to be explored. 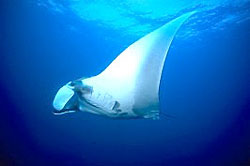 Ko Bon and Ko Tachai, are two uninhabited islands, situated between the Similans and Surin National Park to the North of the Similans.

They offer a variety of excellent dive sites - including a breathtaking drop-off - with a wealth of hard and soft corals, and great opportunities to see passing manta rays and whale sharks. 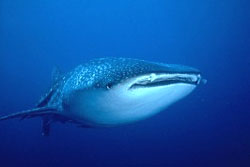 Richelieu Rock, the best dive site in the Kingdom, lies Northeast of Ko Tachai, close to the southern border of Burma.

This small rocky outcrop is covered in soft corals and offers an amazing variety of marine life, with the chance to see Stingrays, Guitar Rays, Leopard Sharks and large schools of Trevallies and Barracudas.

And best of all, Richelieu Rock is a ‘magnet’ for Whale Sharks and ranks among the world’s best places to observe these gentle giants. Close encounters with two or three whale sharks are fairly common, making this site a unique experience for any diver.