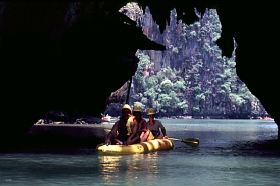 Phang-nga Bay is unquestionably one of the great scenic attractions in the world and a must do during your stay in Phuket.

Fringing Phang-nga Bay is a complex network of river estuaries with dense forests of mangrove and nipa palm growing right out into the sea. Protecting the shoreline is a series of sheer-sided limestone mountains and other artistic rock formations that soar up to 300m (980 feet) out of the sea like an eerie army of stone monoliths.

Touring by boat allows you to explore the mysteries of the mangrove swamps and provides a scenic view of distance forested limestone hills. The natural beauty of the bay is breathtaking as you pass coves and bays many with remote idyllic tropical beaches.

Most of the mountains and outcroppings are of limestone origin covered with luxuriant vegetation, bushes, and climber vines that overhang the cliffs. Upon closer inspection many of these odd rock formations are hollow and conceal hidden caves (Hongs) and lagoons. It is easy to picture how pirates managed to operate in this area for centuries and were able to defy the authorities by simply vanishing into one of the many hiding places.

Many visitors claim that being paddled in a canoe through the side of a limestone mountain that emerges into a pristine tidal lagoon isolated from the world and surrounded by sheer rock evokes a surreal experience of going back in time a million years.

This is clearly one of the most remarkable journeys you will ever make. The appeal is universal, it's the perfect all-season, all-weather outdoor adventure, ideal for everyone in the family.

Traditionally domesticated elephants were used as transport, and in the logging industry moving cut timber. All logging was officially banned in Thailand in 1989. Elephants that had been employed to move logs in the forest became unemployed, that is why they can now be seen in Bangkok and tourist areas literally 'begging' for a living. It costs approximately 500 US$ per month to feed and care for an elephant in captivity.

In the modern world elephants have an almost human-like problem of needing to be gainfully employed in order to survive. Elephant trekking can generate the funds to assure the survival of thousands of elephants in a dignified manner. Since 1994 numerous trekking operators offer visitors to the island the opportunity to ride on an elephant.

If you don’t mind the violence, a Thai boxing match is worth attending for the pure spectacle and the wild musical accompaniment, the ceremonial beginning of each match, and the frenzied betting around the stadium.

Each fight consists of five rounds of three minutes each. Accompanying the fight is music stimulated by action in the ring, rising and falling as the boxers battle it out. All surfaces of the body are considered fair targets, and any part of the body except the head may be used to strike an opponent.

The origins of this martial art and sport are thought to stretch back to the wars with the Burmese during the 15th century. Thai Boxing matches are held every Friday night at the Boxing stadium in Phuket town.

The bungy jump site in Kahtu, located halfway between Patong and Phuket Town, is a beautiful lakeside setting that is worth a visit even if you do not jump. Jumpers take off from a metal cage hoisted by a crane to a height of 44 meters. Below the cage is a used tin mine lake. Anyone from 40 to 230 Kg is welcome to make the jump.

800 meters from the Chalong traffic circle towards Kata is a shooting range especially designed for those experienced in using hand guns and rifles. Available are hand guns and rifles of varying caliber. All ammunitions used are special range bullets. The cost varies according to the gun models and quantity of bullets spent.